On Tuesday 13th June 2017, children from Year 1, 2 and 3 travelled to the Walker Activity Dome to take part in the Key Step Gymnastics Competition. It was a very exciting morning!

When we arrived, we were split into different groups. This meant we could try lots of new activities when we were not competing. We tried new gymnastic elements such as paired work, cheerleading, the beam and the vault. Everybody was so brave and tried out everything!

We had to compete one by one, watching carefully for the judges to show us when they were ready for us to start. Lots of us began to feel a little nervous, but we were also excited! Everybody had worked very hard, practising a specific gymnastics routine at home and in school, so we knew that deep down we could do it! 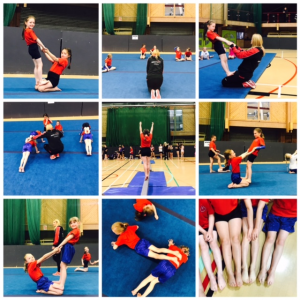 A few days later, the teachers received the scores from the competition – and they were so proud! The KS1 team scored 33.25, KS2 scored 31, and Elizabeth (Y3) who competed against Year 5 and 6 children, scored 8.7! Scoring 8.7 meant that Elizabeth qualified for the next level of the competition in Sunderland.

A massive well done to all involved!