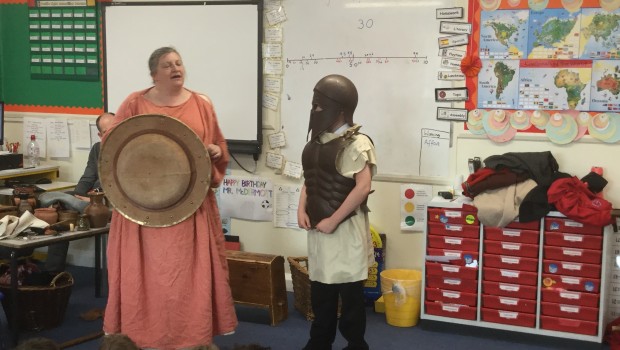 By Hannah and Isaac

On Friday, an Ancient Greece housewife came in, she taught us some facts about Ancient Greece. She also told us a lot of Greek myths like: when the women wore pins in there kittles and stabbed a soldier in the guts, but luckily fashion came out and everybody stopped wearing them. Some children got to wear some clothes, like Alex wore some things that a warrior would wear. Issy and Gonca did some Ancient Greek weaving. They also figured out how to make it go in and out. Shahan got to wear the men’s fashion  clothing. The girls wore kittles with a bit  of material. The house wife told us that Spartan children at the age of 7 seven were trained to be in the army. They did not like reading. She told us another myth where a mother told her son come back holding your shield or come back lying on your shield. When you were a warrior, you had a big shield. It was so big and heavy that you had to put it down to run. If you lived in Ancient Greek times you would gather some sheep wool and make coloured string by hand. You also needed a sword to be a warrior, the swords had a curved end so that it wouldn’t brake. The ladies weren’t allowed outside without the men’s permission in Athens! They also did all the work – washing, cleaning and making clothes for the family.

We had a really great afternoon and learnt lots of interesting facts!